To Elf Or Not To Elf: My Christmas Conundrum

Oh Christmas season! How you creep up on me each and every year. I am always the person that waits until the weekend before Christmas to finish all their shopping. The Christmas season turns everything into such a cluster. People going crazy searching for the one toy their kid supposedly cannot live without. Teenagers in crop tops and winter coats begging their parents for something that I think is highly inappropriate. Get that kid a damn EZ Bake Oven and a turtleneck with a snowman on it! Is that not in style anymore?

Disclaimer: I am totally turning into an old person. I went to a high school football game with my husband and was SHOCKED by the amount of fourteen year old girls in crop tops and leggings wearing full makeup with teased hair. It was like mini Olivia Newton Johns everywhere! My Dad would have locked me in the house if I even dared to wear some of their outfits. I am trying to embrace the fact I am no longer cool and out of touch with whatever is now cool. And that I sound exactly like my Mom when I say these things.

Back to the real issue here. One of my least favorite things to see on Facebook before I had kids was this damn elf. What the hell made him so special? And it looked like a straight up creeper. I think I would have nightmares if I thought it was watching me all day and all night. Did kids actually believe that this elf dictated the amount of gifts they would receive on Christmas morning? Could it not have been a cute cuddly snowman that told Santa Claus that you were waiting to push your sister until your parents left the room?

Now that I have a kid I totally get it. It’s pretty much a great way to bribe your kid into not being a total asshole for the month of December. I’m normally game for anything that will help me force my child into being good. Especially during the Christmas season when he is hyped up on sugar 90% of the time and handed an overly expensive toy or gift every time he walks into a relative’s home.

Disclaimer #2: As I was writing this post I decided to google the good ol’ Elf on the Shelf to get the real story behind his creation. This is the first thing I saw. Really people? I clicked the link but couldn’t bring myself to read the article. 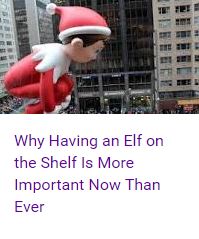 Disclaimer #3: It looks like this elf is about to take a poop on the people below him.

There is something about this elf that I just can’t get myself to buy into. With Henry being two and a half years old, I need to make my decision. I need to shit or get off the pot. I have come up with the pros and cons of having a creepy little elf in my house each winter for the next fifteen years. How long do kids believe in Santa now?

Even though my list of cons is definitely longer than my list of pros I am still debating. I don’t want to feel like I am cheating Henry out of something that would possibly make him really happy. But should I have to stress myself out to make my toddler happy? That is a stupid question. I stress over everything when it comes to this kid. I have done a lot of things that stressed me out because they made him happy.

So please give me your advice! Any moms out there that have bucked the elf system and said screw it? Any elf horror stories I should hear about? I can’t wait to hear what you all think!

This site uses Akismet to reduce spam. Learn how your comment data is processed.

I am a full time working mom. I write about real life, and real life gets messy. You can read more of my writing on Good Morning America, The Today Show, Her View From Home, Motherly, Scary Mommy and others.